All the enchantment of a bay that has been described as the most beautiful in the Mediterranean, a few steps away from the lively town of Alghero.
Villa Las Tronas is the delightful 5-star hotel that has become the symbol of Alghero - "the Golden Door to tourism in Sardinia" - situated on the Riviera del Corallo on the north-west coast of the Sardinia Island.

Once the residence of Italian Royalty during their holidays in Sardinia, Las Tronas conserves the historic atmosphere of the aristocratic "buen retiro", renewing the tradition and charm of the ancient residence.
A spectacular position, on the sea-shore. A peaceful, exclusive oasis on a private headland. 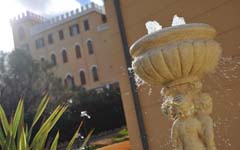 Reefs reaching out into the waters of the bay like the bows of ships, two hectares of park... To forget the rush and tear of everyday life and get back your balance, savouring the pleasures of a good restaurant and the relaxing intimacy of the Spa.
The Hotel and the Spa - with its covered sea-water swimming-pool (also looking out over the Mediterranean), sauna, Turkish bath, Kneipp walkway, gym and the beauty area - are open all through the year.


The pleasures of dining

Dining at Villa Las Tronas is an experience to be shared with the one you love: after an aperitif at the cosy, welcoming bar, dinner is served by candlelight in the restaurant, accompanied by classical music played live, or in an informal manner but just as delightful on the panoramic terrace close by.

In Roman tradition ancestors were worshipped as Lares (from the Latin lar, "hearth", and the Etruscan lar, "father"), whose spirits kept vigil over the favourable progress of the family, property and activity in general. The Lares familiares were represented by clay or wax statuettes called sigilla (from signum, "sign", "effigy"), placed in specific niches and honoured by lighting a small flame.

In the internet era, an image can give substance to the sigillum and our seeing it will light the flame. The name "Las Tronas" ("the pulpits" in algherese) derives from the characteristic shape of some of the rocks, now largely eroded by the sea.
Built around 1880 on the ruins of an ancient watch-tower by Alessandro, the third Count of St. Elia (Elijah), the villa was initially destined to be a hunter’s cabin. In 1917 the quays and town walls were built, aimed at ensuring the necessary privacy for guests, while between 1918 and 1920 Don Luigi Arborio Mella, the fourth Count of St. Elia, did important renovation work, urged on by his English wife Lady Rosamond Marke Wood: the building took on its shape vaguely inspired by the medieval castle, following the fashion of the time and the rank of the family. His brother Alberto had in the meantime become Maestro di Camera (Chamberlain) to Pope Pius XI, and also kept this rank with Pius XII.
The villa thus became a meeting-place for the highest society of the epoch; the Romanov Princesses and Italian Royalty were habitual guests, in summer to swim in the sea, in winter for hunting.
In 1959 Francesco Arborio Mella, fifth Count of St. Elia, sold the villa to the husband and wife Leonardo Masia and Giuseppina Fonnesu, who turned it into a hotel and donated it to their children, Giuseppe, Teresa, Adriana and Battista. Among their first clients were the dramatist, Samuel Beckett, and the actors Virna Lisi, Ugo Tognazzi, Liz Taylor and Richard Burton.
In 1961 another floor was built and the villa restored by Cavaliere (Sir) Andrea Trova, Teresa’s husband, taking on its current form. In the meantime Nino La Spina, Adriana’s lawyer husband, helped to manage the administrative aspects and run the hotel. The atmosphere thus featured an unusual "double insularity": the La Spina family were of Sicilian origin and many pieces of antique furniture present in the hotel came from their Sicilian homes.


Just 25 rooms and suites, some with a terrace, opening onto magnificent views of the park or sea.


Welcoming and bright, each is different from the others, just as the tastes and passions of each of us are different.

Dining at Villa Las Tronas is an experience to be shared with the one you love: after an aperitif at the cosy, welcoming bar, dinner is served by candlelight in the restaurant, accompanied by classical music played live, or in an informal manner but just as delightful on the panoramic terrace close by.

Villa Las Tronas Spa offers treatments and products [ comfort zone ], whose action encourages taking care of yourself, with sensual pleasure.
Product formulations [ comfort zone ] are certified by the FDA (U.S. Food & Drug Administration), the US government
agency that constitutes the world reference base for the work of surveillance, control and protection of health.

For those preferring to hire the entire facility (hotel, restaurant, park, spa ...), a "privacy supplement" is envisaged which will vary depending on the season chosen (and will be added to the price of the services requested).
From 4 January to 21 March, from 31 October to 27 December