Welcome to our “Trullo”, we hope you enjoy a holiday between nature and culture.

Our little paradise is situated on the edge of the Apulian Itria Valley in the province of Brindisi. It is 7 km from Ostuni, Cisternino and Ceglie, 15 km from the Adriatic Sea and 45 from the Ionian Sea.
It consists of three buildings connected by stairs and terraces, surrounded by olive trees, walnuts, almonds, and prickly pears, within 12,000 square meters bounded by stone walls. 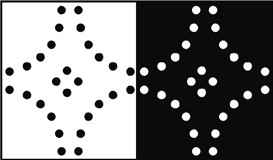 Why the “logo” The Trullo is part of our lives and our passions: Africa bathed by the same sea, the Middle East with its architecture, the countryside, good food and wine. All this influenced our “logo” reproduced on the iron doors and windows, where holes and studs draw wonderful kaleidoscopes of light. Black and white stands for the two shores of the Mediterranean, the symbols recall Arabian and African Art and iron that colours the apulian earth red.We got these insights with the help of the architect Pietro Laureano, UNESCO consultant. In his books he argues that this land is like Palestine, Egypt, Syria, Ethiopia ... and that the entire Valle d’Itria should be World Heritage Site.
GIARDINI DI PIETRA - I Sassi di Matera e la civiltà mediterranea 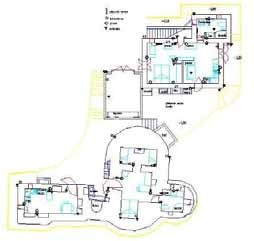 The complex is divided into various types of architecture: the “Trullo” with three cones, the ostunense tower with a spiral staircase that goes up into the dome, the “Lamia” or barn and the cube (new building).
The traditional buildings have been completely refurbished, maintaining the original locations. 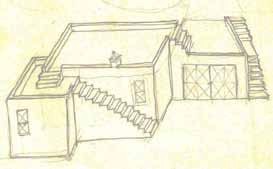 Including the existing kitchen, which consists of a fireplace and a wood-burning oven.

The ancient cistern collects rainwater from the roof, now used to water the plants and flower beds that surround the complex. The new building was designed by us respecting simplicity but with attention to detail. Here and there you will find items from around the world and works of art. The exterior is quipped with a shadily gazebo, a fireplace, a large sink and a shower. You can admire the amazing view from
the terrace on the roof, and at night, you will see countless stars that sparkle in the sky of Puglia.


SERVICE
The small complex of three buildings is organized as follows:

New building, 50 m² with central heating, large kitchen, a bedroom, a bathroom with washing machine and a closet. It can accommodate a couple and has possibilities for 1 or 2 additional children.


Trullo, 40 m². From the large main room you enter the bathroom, the large alcove with a double bed and another room with a fireplace, equipped with two small niches used as beds. Lamia, 20 square meters with an anteroom with stone sink and a bedroom equipped with a bed, which can be transformed into

a double or 2 single beds. External Spaces, 3 terraces, showers, sinks, fireplaces, oven, a large gazebo and parking. The complex is equipped with an accessory compartment where you’ll find bicycles, hammocks,


chairs, tables, mattresses and everything you will need to spend a day outdoors at the sea.

We host only one group per period, at least 1 week. We provide linens and towels. All expenses (water, electricity, gas and cleaning) are included. If you wish a periodic cleaning or a change of the linens and towels we can provide it.
TIPS 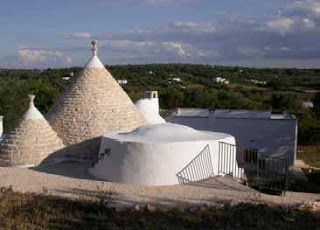 Food, wine and oil: 1.5 km on the main road from Ostuni to “Trullo” continuing to Martina Franca, there is an old-style grocer, really comfortable; you’ll find everything at every day and every hour. The owner, Maria, is an excellent cook and has a large wood-burning oven. We recommend you try her biscuits, her pies, artichoke omelets and her bread. In front of the grocery store you can buy fruits and vegetables directly from a street vendor. We also purchased “Il Gelso” an herbalist’s shop well signposted, just before the grocer on the right. There is also a cheese dairy on the same street. Excellent wines and olive oils you can find in the “Cantina Sociale di Ostuni”, on the ring road just before the junction for Brindisi. 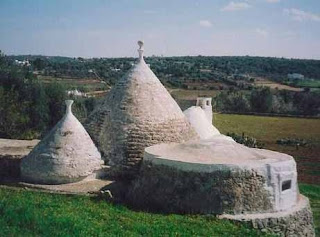 Restaurants: In Puglia you eat well, practically everywhere. We greatly appreciate the quality of catering in Ceglie, a city with a tradition of culinary excellence. We recommend “Cibus” for a dinner of high-level and “Il Capitolo” for an economically traditional meal. If you love grilled meat go to Cisternino in typical stove ready, where you can enjoy sitting in the narrow medieval streets of the city, after having chosen directly from the butcher. Seafood lovers (especially sea urchins) should not miss Torre Canne, which is on the way to Savelletri. At 5 meters from the sea, sitting at plastic tables, you will enjoy the best spaghetti with sea urchins of the world! On the other coast, at the Ionian Sea, we recommend a fish restaurant in Torre Colimena. Overlooking the marina blue water, you seem to be in a Fellini film (especially in August, when the place is filled with local people). For an appetizer we recommend the wonderful terrace of the “Gran Caffe Tito Schipa”, a few meters from the central “Piazza” of Ostuni, with a breathtaking view over the old City. 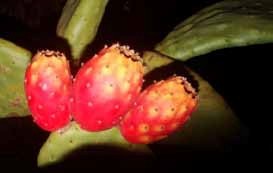 Seas: The Adriatic Sea is beautiful and the Ionian Sea is truly amazing. We advise you to pay attention to the direction of the wind, if it is blowing from the north we suggest to go to the Ionian Sea, because you’ll find the Adriatic Sea agitated. In high season we recommend Campomarino and Torre Colimena, little less crowded places. On the Adriatic side we recommend the nature reserve of Torre Guaceto (special!) and Apani, immediately to the south. While you are walking to the reserve you will find a large bay protected from winds and a coastal landscape. For your “every day” sea visits you should go to Torre Pozzella, a beautiful bay in the rocks, or the beautiful white beaches between Pilone and Torre Canne, always on the Adriatic Sea. 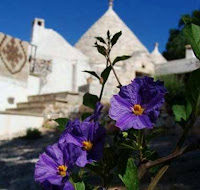 Culture: Puglia is an ancient land and this area boasts spectacular cities on every hill! Ostuni, Martina Franca, Ceglie, Cisternino, Locorotondo, Alberobello. All locations close to the “Trullo”. A little further Lecce, Bari, Matera, Andria with Castel del Monte and Polignano... (Find details in the guides), but you should also read the newspapers, so that you can discover the modern cultural vitality of Puglia. Concerts, shows, dances, workshops, festivals of the country,... tirelessly throughout the summer and beyond. Also close to the “Trullo” interesting things are going to happen: for example, the theater “La Luna nel Pozzo”, 3 km from the “Trullo”. Or the Alter Fest near Cisternino, an interesting youth music festival, in an area equipped for the occasion, with stalls and food for two weeks in August.

The Trullo is situated in Contrada Cervarolo, whose name recalls the presence of deer in the foothills of Murgia when it was still covered with forests. The first buildings of this area date back to the sixteenth century. A few hundred meters from the ”Trullo”, you will find a beautiful ”masseria”, a traditional farm, with its baroque church of 1798, once a place of religious pilgrimage. The rolling hills of the district still have a low population density. The territory is divided into areas of approximately 10,000 square meters. Many are still attended by its native owners, at least in summer. Others, like ours, were bought and restored not only by Italians. The complex has a wonderful southern exposure and is located approximately 300 meters above sea level, dominating the district with its large cone. The Trullo has certainly been inhabited since 1800 and was a landmark for the neighborhood because of its wood-fired oven, the only one of the area. Even today it can happen that some old lady arrives for a visit to remember the past ... and nose around. We bought the Trullo in 2002; the restructuring was completed in 2005. Since then, we host friends and friends  of friends. In 2010 it was re-whitewashed, inside and outside. How it was How it is