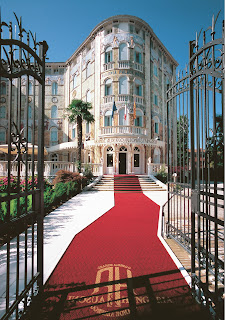 In the fascinating and historic atmosphere of the Grande Albergo Ausonia & Hungaria Venice Lido, acknowledged masterpiece of Art Nouveau with its striking polychrome majolica, Friday, August 31st, 2012 was inaugurated the opening of the exhibition - the "2 steps in Liberty inTurin contemporary re-readings between art and history. " With this exhibition, the ABCOnlusTURIN, who conceived and organized the scientific care of Alessandro Allocco and artistic care of Silvana Nota, with the patronage of Regione Piedmont, Provincia di Tourin, the City of Roseto degli Abruzzi  and contributions of Dogale Ospitalità e Benessere, Russo Palace Hotel,  AitmArt, Atmosphera Italia,has officially opened the branch in Turin directed by Ernestina De Paola, project manager, launching at that time the first segment of its cultural program.

The exhibition in fact, expresses fully his mission, aimed at the promotion of cultural heritage and the promotion of young artists as a further human heritage by supporting and encouraging as opportunities for growth and development.

To present, ABCOnlus TURIN chose Venice, the city where it has its headquarters, the non-profit organization that has been promoting in Italy and abroad, the "Italian Liberty", in which the Turin exhibition "2 steps in Liberty inTurin contemporary re-readings between art and history" fits with its own identity, characterized the encounter between the languages ​​of contemporary art and historical reappraisal.

The choice of the site for the exposition, made possible thanks to the availability of the Grande Albergo Ausonia & Hungaria which allowed the construction within its historic rooms are characterized by the preciousness of the original furnishings of the era, expresses the policy and the poetics of the project, developed with an itinerant concept in order to bring attention to places. Places that like Venice Lido, from Grande Albergo Ausonia & Hungaria, where you host (built in 1905), sees a series of manors in style worthying great attention.

The  itinerant exhibition is structured on a complex interdisciplinary work and sees artists and curators involved for months in a work-in-progress on a multi-year development plan, that starts from the exploration of Liberty in the known and unknown aspects of eco materials, carefully used for the entire production.

Two focal points of development: the emphasis on one aspect of Turin lesser known heritage represented by Liberty and the message of innovation, positive spirit and content of research in the philosophy of Liberty itself.
The movement developed in Britain as a decorative technique at the end of '800 inspired by the beauty of the cards used for the packaging of tea from the Far East of this vast empire, became transformed during the first half of the last century in philosophy. It encompassed all the arts sweeping through Europe with names and different aspects in each country. In Turin, the development of this philosophy is realized through the widespread dissemination in the field of architecture and urban planning that make the city an excellent example of the Liberty style.

Six artists of the project: Erika Dardano, Jessica Dardano, Chiara Miola, Danilo Monateri and Greta Staltari, all talented young people professionally involved in the art world who have their studios in Turin, for years considered one of the capitals of contemporary art.
The collaboration between five visual artists mentioned above, and the equally young musician and composer Richard Soffietti Heavy Metal, comes "Libero ma Inquieto" a 17-minutes musical performance to be enjoyed as a sound opera.

Feature of the exhibition is to propose an artist at each stop outside the Group, in this case, Andrea Speziali, creator of “Romagna Liberty”.

"2 steps in Liberty in Turin contemporary re-readings between art and history" is conceived as a site-specific, whose layout is cared by the whole team.

It offers a preview  that consists of a series of selected pieces from the cycle of work in progress to the appropriate areas of the Grande Albergo Ausonia & Hungaria, and presents works of painting, sculpture, installation, photography, inside which will include differents languages ​​such as Artist's book , the Works bright, the Jewel as Wearable art and Fiber Art.

The works presented observe and explore the values ​​and philosophy of an extraordinary moment in history, the Liberty, but elaborating the essence, are a poetic freedom of expression of all

present new and experimental in which we can identify multiple optical reading .

The day after each vernissage, the artists will implement a series of sketches of the city that will host the exhibition, creating “cahiers de voyage”: testimony touched the stage, and material that will be added to those in the next steps of the exhibition.

In connection with Venice, the exposition will be represented in Marostica about the showing dedicated to Mirko Vucetich, while 18th to 21st October 2012 will be hosted at the show "SAIE - rebuild Italy" in Bologna, then will tap Liberty Italian and foreigner places.