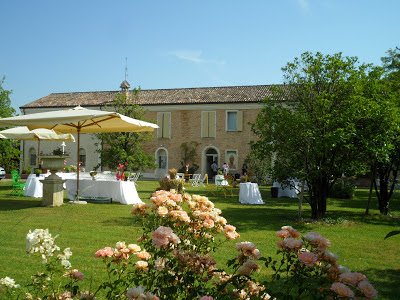 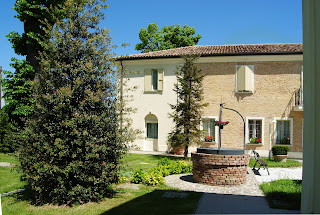 There's a place in the hearth of Romagna country where is Villa Roncuzzi Relais.The Relais is in San Pancrazio, a small outlying district of the Municipality of Russi, in the Ravenna province, close to the hills and to the sea.

It's an ideal place to celebrate an event, a success, an amour, a secret joy or simply to enjoy a moment of the city in surrondings conducive to the delicate pleasures of country life, with the alluring luxury of a charming holiday. 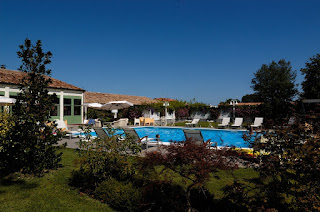 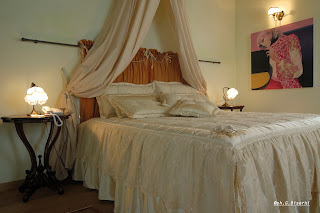 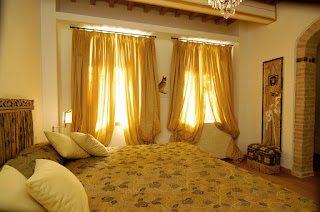 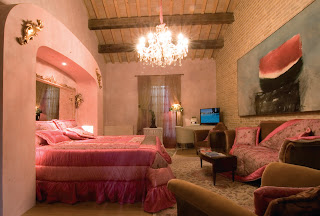 THE Relais offers elegant design and rooms to respect a very demanding tourists or business men that need a relaxing break at the end of a long day of work in according of the short distance from city surrounded.

The 22 rooms are furnished with elegance and have their original stone walls and arches and fine wooden beams. The attention to the details is complemented by the most comforts: private bathroom, with tub or spacious shower and courtesy set, room service, independent air conditioning, telephone, hair-dryer, Tv LCD, satellite tv and Sky, minibar, wireless system.

Every room is decorated with fine frescoes, sculptures, pottery and paintings by noted artists so that guests might experience unexpected emotional involvement. 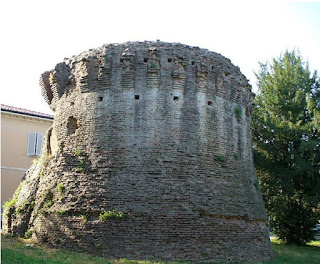 Formed in the Middle Ages and in the sixteenth century as a result of the struggle between Ravenna and Faenza for the supremacy of the border, Russian is a bustling agricultural-industrial complex, known to archaeologists for the discovery of an important Roman villa nearby, dating from the Augustan age. Today, the ancient and mighty fortified structure remained the fortress, a circular building and a tower built in the former Hospital Maccabelli, there are also four corner towers. Significant still are the religious buildings, all dating from the eighteenth century: the mother church, the Church of the Carmine, the Church of Our Lady and the Oratory of St. Francis, which houses the tomb of Domenico Antonio Farini. Noteworthy are also religious buildings, all dating from the XVIII: the largest is that of the mother church. A Russians are the traditions and memories of the past by making use of local products and wine.

The third Sunday of September is a very important festival that draws all people of Romagna: the Fira de Sept Dulur, celebration of Our Lady of Seven Sorrows, regulated by Innocent XI in 1688, which is also fair and festival village renowned for its specialties food: "Nice and cot" and "Nova Canena"

Very lively market is held on Tuesday and Friday mornings in Piazza Farini, an abundance of stalls selling agricultural products of the area. Interesting is also the Fish century. XIX, used today in the municipal market.

The municipal archive of Russians is full of maps and drawings that offer a rich documentation of the territory and the main buildings from the XVII - XVIII century.

Ravenna  is a city and comune in the Emilia-Romagna region of Italy. The city is inland, but is connected to the Adriatic Sea by a canal. Ravenna once served as the seat of the Western Roman Empire and later the Ostrogothic Kngdom. It is presently the capital of the province of Ravenna. At 652.89  km² (252.08 spmi), Ravenna is the second-largest commune in land aerea in Italy, although it is only a little more half the size of the largest, Rome.
The oringins of Ravenna are uncertain.

The first settlement is variously attributed to the Tyrrhenians, the Thessalians or the Umbrians. Ravenna consisted of houses built on piles on a series of small islands in a marshy loagoon - a situazion similar to Venice several centuries later. The Romans ignored it during their conquest of the Po River Delta, but later accepted it into the Roman Republic as a federated town in 89 BC. In 49 BC, it was the location where Julis Caesar gathered his forces before crossing the Rubicon. Later, after his battle against Mark Antony in 31 BC, Emperor Augustus Founfed the military harbor of Classe. This harbor, protected at first by its own walls, was an important stazione of the Roman imperial Fleet, Nowadays the city is landlocked, but Ravenna remained an important seaport on the Adriatic until the early Middle Ages.

Or the city of Ravenna mosaic - Relais Villa Roncuzzi 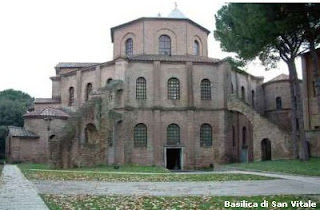 This particular geographic area is very interesting for its closeness to the sea. It's an ideal place for a good stay in every season.
It's centrality allows to reach and visit in a few minutes towns as Ravenna. It's know for its monuments, mosaics acknowledge from Unesco as world's property (S. Apollinare in Classe, Basilica di San Apollinare Nuovo, Teodorico Building and Dante's tomb, where he lies in the neoclassic little temple of Camillo Morigia).

Faenza is very known for its ceramics shops and the international museum, unique in the world, where people can admire a lot of ceramics from Renaissance age to our days; but every town and little centre of Ravenna province is rich of its history and art of every style and historical period.
Bagnacavallo, Lugo, Bagnare di Romagna, Brisighella, Riolo Terme SPA, Cervia and Imola knowns for its autodrome (Imola Gran Prix).
Russi centre, where a tourist can visit the ancient roman Villa, considered the most important roman settlement of North of Italy.

YOUR ENJOYMENT?
You can reach Cervia, Milano Marittima, San Marino (famous from an historical point of view) and Rimini.
Going to Bagnacavallo and the province of Ravenna or Forlì and Cesena, you can reach a lot of restaurants and taverns where it's possible to choose an interesting enogastronomic journey. Infact, in this area, there are many local cellars known for their wines' productions as Sangiovese Superiore.

The Ravenna province offers numerous naturalistic green oasis. In the nearby of Adriatic coast, it's possible to reach the great Park of Delta del Po, with its natural richness and anthropic tracks of ancient ages.
These wonderfull places allow a relaxing stay and in the same time an energic holiday; contact with nature by bycicle or without it, by canoe going towards this green area as Punta Alberete and Saline Etrusche .

BUSINESS
This corner of paradise in the middle of Romagna countryside is very important for business or traveller men that need a relaxing stay to start their work with more energy and reach the industrial area of Ravenna and Forlì in about 20 minutes.
A short time for people that always move for work!

Pubblicato da Unknown a 1:59 AM