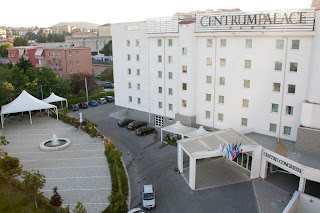 The Centrum Palace is the ideal place for a business trip or a holiday in the heart of southern Italy.The Adriatic and Tyrrhenian coasts, ski resorts, national parks and lakes are all within easy reach, as are of course the various localities of the Molise region, which boasts an immense artistic, natural and gastronomic heritage. There are 144 rooms available for guests and including 14 junior suites with a total of 330 beds. They are spacious and well-furnished, combining practicality and elegance in perfect harmony. All the rooms are well-insulated against noise and have en-suite bathrooms with Jacuzzi or shower, direct telephone, air conditioning, safe deposit box for laptop computers and other valuables, hairdryer, mini bar, 21-inch colour TV with cable and satellite connections, broadband internet access, and radio/TV sound in the bathrooms. There is garage parking for more than 60 cars and private parking for coaches.

A smart and comfortable environment where you can sample the classic dishes of Italian cuisine and discover the traditional flavours of the local area. The wine list includes a wide selection of national and local wines. To organize a candle-lit dinner, breakfast, working lunch or even a gala dinner, we are here to advise you on the large range of à-la-carte dishes, fixed menus, business lunches and wedding menus.

The art of welcoming people and staging events is one of our specialties, of which we are very proud. A hall of over 900 square metres that can comfortably seat 450 people, suitable for all kinds of event, be it a company lunch, a wedding reception, a gala dinner or special occasion.

The Auditorium is designed to host fashion shows, art exhibitions, concerts and stage shows. The separate entrance, its location on the ground floor to facilitate setting-up, the acoustics, the broad spaces, the wardrobe, the bar, the changing rooms, the foyer, are useful advantages for anybody seeking to hold a cultural event or show in the centre of town.

The Centrum Palace is the ideal place to host all manner of business meetings. There are rooms of various sizes, comfortably furnished and equipped with the latest technology. Our highly-trained staff are on hand to ensure the success of your event.

The origins of Campobasso are disputed. According to the most widely held theory, the city was founded by the Lombards before the 8th century as a fortified camp on the slope of the hill where the castle stands. The original name was Campus vassorum, suggesting that the city was the seat of the vassals of the Duke of Spoleto. After the Norman conquest of Southern Italy, Campobasso lost its importance as a defensive stronghold, but became a significant trading and administration centre. From 1330 to 1745 the city was ruled by the Monforte-Gambatesa family, who built the castle and established a mint. Later it came under the control of the Di Capua, Gonzaga, Vitagliano, Carafa and Romano families. In 1763 the citizens abandoned the old city and settled in the lower valley. The current city was expanded in 1814 by the King of Naples Joachim Murat, and lies on the Campo Basso ("Low field). The main attraction of Campobasso is the Castello Monforte, built in 1450 by the local ruler Nicola II Monforte, over Lombard or Norman ruins. The castle has Guelph merlons and stands on a commanding point, where traces of ancient settlements (including Samnite walls) have been found. The current construction is the result of later rebuildings after the earthquakes of 1456 and 1805.Next to the castle is the Chiesa della Madonna del Monte (Santa Maria Maggiore), erected in the 11th century and rebuilt in 1525. It houses a precious wooden statue of the Incoronata from 1334. Below the castle, the church of St. George is probably the oldest in Campobasso, built around the year 1000 AD over the ruins of a Pagan temple. The Cathedral, or Chiesa della Santissima Trinità (Church of the Holy Trinity), was built in 1504 outside the city walls. It was destroyed by an earthquake in 1805 and a new Neoclassical edifice was built in 1829. The church of San Bartolomeo is a Romanesque building from the 11th century, in limestone. The interior has a nave and two aisles. San Leonardo (14th century) has a façade mixing Gothic and Romanesque elements, and a side mullioned window with vegetable decorations influenced by the Apulian architecture of the period. Villa de Capoa, recently restored, is a noteworthy garden with statues and a wide variety of plant species, including sequoias, Norway Spruces, cypresses and Lebanon Cedars.

Truffles: the soil of Molise is a veritable goldmine of the much sought-after black and white truffles.
Olive oil: the oil of Molise has been famous since ancient times, having been mentioned by none other than the Roman historian Livy. Cheese: the traditional skills of the shepherds, the artisanal methods of production which are still practiced today and the high quality of the raw materials all combine to give the local dairy products – including mozzarella, ricotta, pecorino and many more – a touch of excellence. Cured meats: the quality of the meats ensures the goodness of a whole range of products, including ham, capocollo, coppa, and others. The “ventricina” (a spreadable sausage) produced in Montenero di Bisaccia is famous. Confectionery: mostaccioli, ferratele, pepatelli, taralli – there are all manner of local sweetmeats in Molise to make your meal complete !