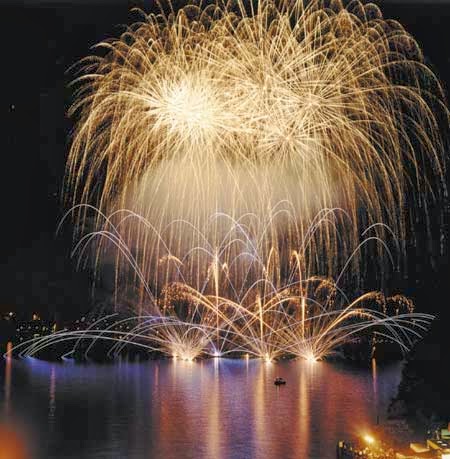 The Redentore Feast-day
The third Saturdays' night of July

The Redentore is one of the Venetians' most treasured festivities, and it is a tourist attraction thanks to the spectacular firework display in the evening. It falls on the third Sunday of July, when the Holy Mass and a very big religious procession are held in the presence of the Patriarch. But the special moment of the festivity takes place on Saturday night; in the magic backdrop of Saint Mark's Basin, a play of lights and reflections produce a kaleidoscope of colours with the silhouetted spires behind domes and bell towers of the city.
The weekend concludes with a gondola regatta.

In the three years between 1575 and 1577 the Serenissima was tormented by the plague: aided by the high density of the population, the disease spread through the city, causing almost 50,000 died witch
was more than a third of the city's inhabitants.

On Septmeber 4th, 1576, the Senate decided that the Doge Alvise Moncenigo should announce the vow to erect a church dedicated to the Redentore (Redeemer), in return for help in ending the plague.

The end of the plague


On July 13th, 1577, the plague was declared definitively over and it was decided that the city's liberation frm the terrible disease should be celebrated on the third Sunday in July every following year. 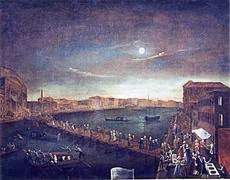 A more popolist aspect soon accompanied the religious one of the festivity, representing liberating times after such sadness.
In order to cross the Giudecca Canal and allow procession to cross over into the church, a mighty bridge of boats was built in the festivity's very first year and this element still characterises the celebrations today.
Voices could be heard from the bridge or the votive church (The Church of the Redentore, buit by Andrea Palladio in 1577) of people either walking or travelling in festively decorated boats. This conferred the festivity with a more porfane aspect, in which devotion intermingled with fun and entertainment.
It was a night of wakefunleness, the "gamous" night, which ended only at daws.


The Redentore today - The "famous night" 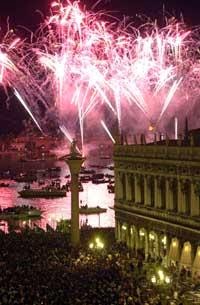 Tradition dictates that at sunset the well illuminated boats, decorated with boughs and coloured ballond, begin congregating in Saint Mark's Basin and the Giudecca Canal.

In the boat, there are either carefully prepared or hastily put-together tables laden with traditional Venetian dishes for dinner.

Everyone eats, drinks, dances and jokes whilst waiting for the firework show, which begins at 11.30pm and lasts until after midnight.

Then the boats, according to tradition, set off slowly for home or the Lido to wait for sunrise.


For this event we provide the exclusive chartering of our boats; rates on request